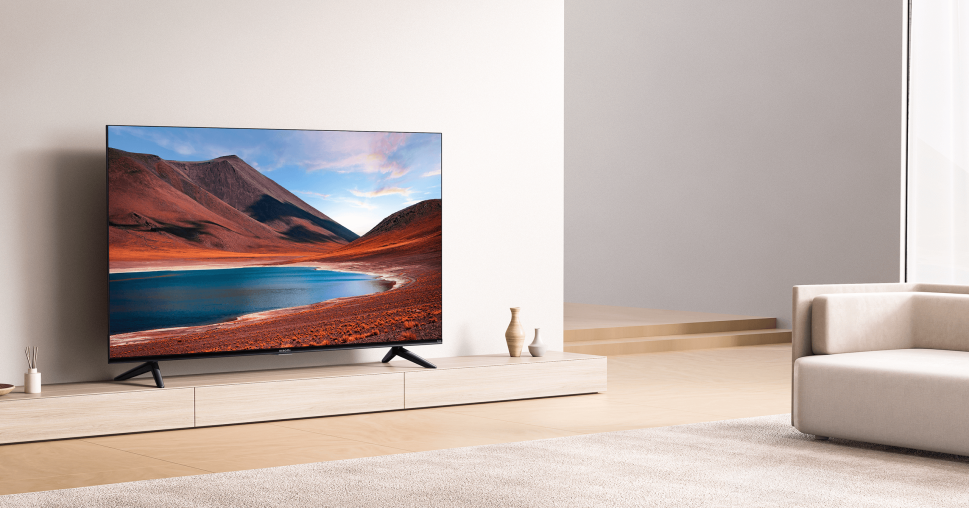 This Xiaomi television has certain similarities with some models we have already seen from the company on previous occasions, such as the Xiaomi Mi TV P1, which is quite similar in terms of functions but has some changes in design.

This Xiaomi TV has two legs on the sides, which are about 31.5 cm deep, so you will need a piece of furniture large enough to put it on, as is the case with the rest of Smart TVs of this size.

On the back, you will find the connections on the left, where you can see its 3 HDMI connections, 2 USB, Ethernet, composite video output, and data connection.

The resolution of this Smart TV is 4K, and it looks excellent throughout its 55 inches, making it an ideal alternative when it comes to watching content on apps such as Netflix, Prime Video, and other services and connecting your console to play.

It has a panel similar to the Xiaomi TV P1, is compatible with HDR 10 HLG, and has a color representation of 80% of the DCI-P3 spectrum. When it comes to watching movies and series, the performance has been excellent, especially with content in 4K and compatible with HDR.
Shortcuts Xiaomi TV F2

As far as games are concerned, we have also obtained an outstanding performance, with good colors and excellent resolution and speed. Although if it had had a refresh rate of 120 Hz, perhaps more could be recommended in this regard.
Its control is versatile and with many buttons.

The control of the Xiaomi TV F2 is complete, and I prefer it this way to having only a couple of buttons, but it may indeed be a bit overwhelming the first time you use it.

It has a specific button to access Amazon Prime Video, Netflix, and Disney Plus, so you can start playing your favorite content by accessing the platforms from anywhere in the interface.

And it also has the usual volume and channel buttons, as well as others to pause and advance playback or to view the television programming guide.

Regardless, it has a numeric keypad to directly access the channel you want to watch. It is fast and, for all the buttons it has, it does not take up too much, although it is true that it can be a bit overwhelming.

One of the peculiarities of this television is that it has Amazon Fire TV inside, a system very similar to the one used in the Amazon Fire TV Stick, with the same benefits and limitations.

Its operation is fast, and it has no problem when it comes to opening the applications beyond some small error in the process; it seems to you more of an issue of the application than of the operating system.

Suppose you are used to the standing order that Android TV offers; you can forget about it in this layer. In that case, you will have several different sections from which to start playing content, being able to choose the applications that you install, live television channels, or application recommendations that Amazon itself suggests.

It’s not the cleanest, most minimalist interface out there, but once you get used to it, you can see how easy it becomes to search for content and move between its apps.

In some apps, such as Prime Video or Netflix, you can see a preview of the content you have pending without having to open the application. It’s a great way to navigate between content from various streaming services, but it’s not available for all apps.

One of the most significant flaws we have found in this Smart TV is related to applications since it does not have an application for HBO Max and some other minority streaming services.

Alexa on the Xiaomi TV F2

The F2 TV has built-in Alexa, which you can invoke with the remote from any screen to ask her for things. This gives it a lot of versatility and makes it possible. Using the Amazon ecosystem for home automation is one of the best options within your reach.

In addition, it is pretty customizable, and you can choose which services you want on the main screen and the order of them, thanks to Fire OS 7. The experience will be personalized so that you access your content in the easiest way possible.