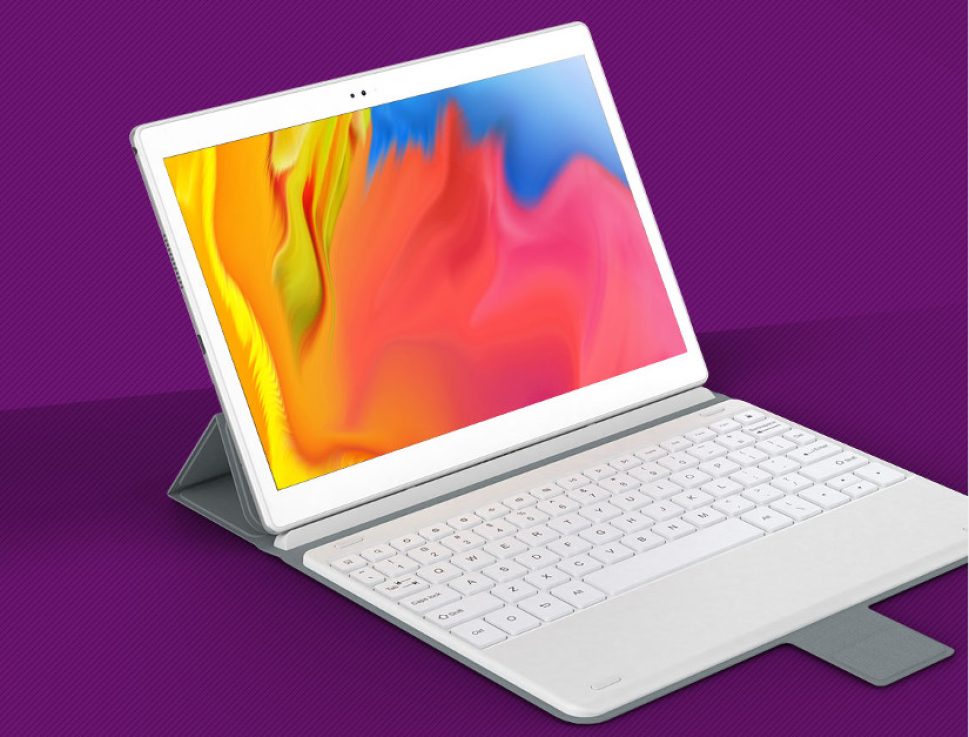 In addition, we want to thank you, as always, for sending us the Bluetooth keyboard (one of the best accessories for any tablet).

The tablet comes in a white cardboard box with the model logo (X Neo) on top, along with the symbols of “Snapdragon” (the brand of the processor it comes with) and “Super Amoled” (the type of screen). On the sides comes the name of the brand.

We find the device at the top wrapped in plastic when opening it. Underneath is a small box with a USB Type-C cable (reversible) and a European Qualcomm Quick Charge 3.0 charger with 12V and 1.5A output or 5V 3A. It also consists of an instruction/warranty manual in several languages, including Spanish. On the other hand, we have another box very similar to the first but somewhat thinner, in which the keyboard is included. This white wireless keyboard connects via several pins on the bottom of the device. In addition, this keyboard case is used to support the tablet as if it were a laptop.

Both products add the CE symbol of “European Conformity,” which indicates that it is suitable and complies with the rules for sale in the European Union.

This tablet was surprised with its design and its measurements. Made of metal and plastic, it is a device with dimensions of 24.59 cm long, 17.54 cm wide, and only 0.71 cm thick. This means that its weight is only 491g, making it very comfortable to transport.

The screen quality is good. Mount a 10.5-inch Super AMOLED panel with a QHD + resolution of 2560 x 1600 pixels and a density of 288 pixels per inch. The colors are vivid, and it looks good from quite a few perspectives (angles). However, the maximum brightness leaves a bit to be desired since the screen looks pretty bad when the sun hits it. The aspect ratio is 8:5, with approximately 77% usable area. It is a tablet whose upper and lower frames are around 15 mm and about 9 mm on the sides.

If we place the tablet in horizontal format (landscape), we find the selfie camera right in the center.

The back is entirely metallic and silver. The primary camera is located in the center and above some Chinese letters (it does not have a flash). Below is the “Alldocube” brand name and various logos.

On the right side, like most devices, you have the power button below the volume up and down buttons. The 3.5mm jack connector (for headphones), a speaker, the USB type C connector, and the slot for nano-SIM cards are on the left side. (One of the nano-SIM cards can be replaced with a storage card.)

The lower part has a magnetic connector with several pins connecting to the keyboard.

On the other hand, the keyboard cover has a QUERTY distribution without Ñ with a magnet on the connector for better fixation and connection to the tablet. This keyboard does not have any illumination.

The distribution of the keys can be configured from the tablet itself, but by default, it is configured with the same language we have configured.

This tablet uses a Snapdragon 660 AIE 8-core processor with a maximum speed of 2.2GHz. This processor has a 64-bit architecture. The GPU graphics card is an Adreno 512 Gaming with a maximum frequency of 850 MHz and is designed for good graphics performance.

This tablet has 4GB of LPDDR4X type RAM.

As for storage, it has 64GB of internal memory. However, considering what the operating system occupies or the installed applications, we are left with approximately 56GB for our use. It includes the possibility of expanding the memory up to 512GB with a micro-SD card instead of one of the nano-SIM cards.

But to compare it and get an idea of ​​its performance, we have subjected it to the AnTuTu tool, obtaining 175,163 points.

It is an adequate performance, but I do not think it is the ideal one to play; I think it is more designed to perform office tasks, surf the Internet, or even for the multimedia section.

After testing it for a week, the tablet behaves correctly both for Internet browsing and for use with multimedia applications. I have also tried to play, and it does it perfectly.

After playing Call Of Duty for approximately 30 minutes in different game modes, the processor has not exceeded 37ºC. The gameplay is good, and there are no signs of “lag” or delay. But being such a large screen, it is difficult to handle.

This tablet comes with Android 9.0 Pie multilanguage without any extra customization and hardly any third-party applications. It is a tablet with Stock Android; therefore, it is possible to receive automatic updates via OTA (receiving the notification directly on the tablet).

In addition, it does not have annoying applications installed; it only has Google services and some Google applications such as YouTube, Maps, or the Chrome browser. The operating system also brings Sound Recorder, Calculator, File Manager, Camera, and FM Radio without needing the Internet.

Also, in the main menu, we can find the function to share the Internet.

After passing the Malwarebytes antivirus, we have verified that this tablet is free of malicious applications.

The primary camera is 8Mpx with an f/2.4 aperture, and the selfie camera is 5Mpx.

As I have already mentioned, the selfie camera is on the tablet’s longer side.

The camera app is very similar to other phones. It has Autofocus, Digital Zoom, and an HDR filter.

I do not see the primary camera handy since the quality is not good enough to use it as the primary camera. On the other hand, the selfie camera, I think, does its job, although, like the primary lens, it does not have excellent quality. Both cameras allow video recording.

The quality of the colors is inferior, and if there is a lot of light, the photos burn regardless of the camera we use. Focusing on low light conditions is very poor.

In my opinion, they could have saved the primary camera and added a new, improved selfie camera for video calls.