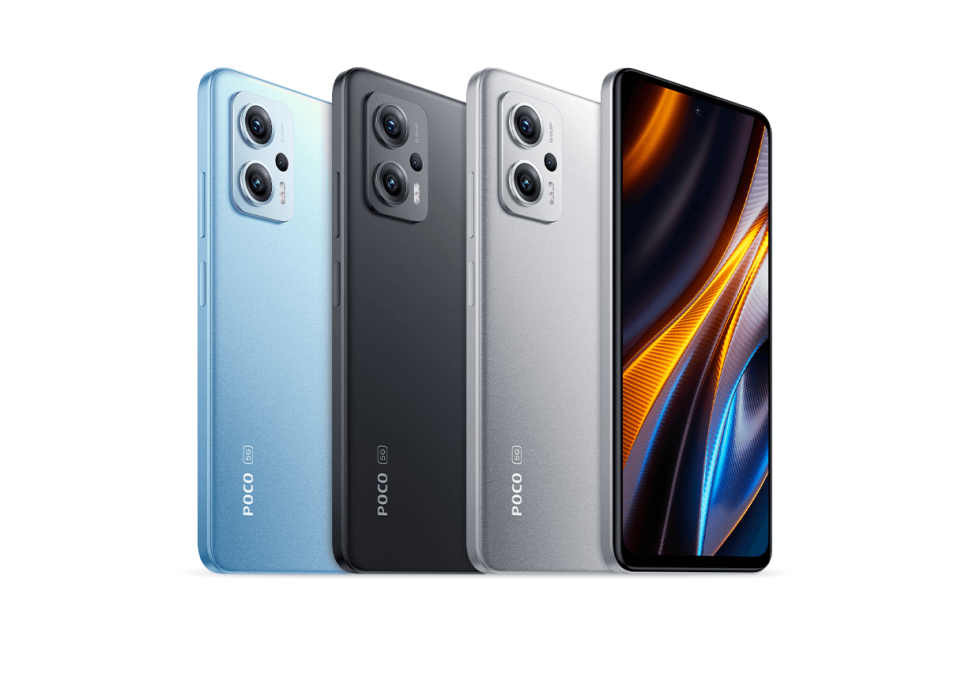 Poco has not been characterized precisely by aspiring to create mobile icons in most of its ranges. But it does not mean that a model that does not exactly go unnoticed does not leave us from time to time.
The design of the Poco X4 GT, despite its rebellious last name, is elegant thanks to the straight lines and the matte finish on its back and is closer to a high-end than a mid-range one.

However, the new Poco X4 GT is a smartphone that, surprisingly for the model it is, opts for discretion both in the tones to choose from (black, gray, and blue) and in the finish, which is matte. And we love it.

In the model we have analyzed, a matte black has been chosen (which does not entirely avoid fingerprints but keeps them controlled), and the Poco X4 GT conveys a sense of elegance and quality that not many brand terminals have managed to carry. On hand.

When we take it, the good feelings are maintained. The lines are smooth but straight, offering a weight of 200 grams and thickness below 9 mm.

The elongated screen format (20.5: 9) makes it easy to grip while giving us plenty of space to enjoy its 6.6-inch screen.

The camera module (or did you think we weren’t going to talk about it?) adopts the large format and stands out enough so that, on the table, the terminal ends up dancing slightly when we touch the area in the upper left corner. But it is well integrated into the design and without exaggerating too much.

At the level of connections, nothing is missing in this Poco X4 GT. On the right side are all the controls, from the volume to the power button, in which the fingerprint reader is housed.

This is not fast and reliable, but an actual lightning bolt makes us enter the system just by touching the button, and it is at a good height for most users’ hands. There is also biometric identification by face.
The Poco X4 GT includes the fingerprint reader on the power button and does not forget the two speakers or the headphone port.

Already in the upper frame, there is room for a “real” speaker, a 3.5 mm headphone port (not everyone has forgotten about it), and even an infrared emitter port.

As for the lower part of the terminal, we have the second speaker and the DualSIM tray, in addition to the corresponding USB-C port.

Wireless connections are another batch of good news. This Poco X4 GT has NFC, Wifi 6 connectivity, and Bluetooth 5.3

Playing and viewing content on the Poco X4 GT’s screen seems to come in the DNA of both the terminal and its potential buyers. Hence, in the first place, the fact of maintaining the physical headphone port, as well as providing the smartphone with a sound speaker system.

The overall volume is high, although with some lack of bass boosts and some distortion from 80% volume. In addition, the lower speaker slightly dominates the upper one but without affecting the sensation of stereo sound with good separation too much.
I want to buy a new mobile, and I don’t know where to start: a guide to know what to look for and what to take into account.

I want to buy a new mobile, and I don’t know where to start: a guide to know what to look for and what to take into account.
Gamer-friendly performance

This seems to be the year of Mediatek, which gains momentum with the support of terminals like this new Poco X4 GT. Partnering with a terminal with gaming aspirations can work out well for them.

On a day-to-day basis, you can already imagine that with this Poco X4 GT, the fluidity of the interface and agility in any task is maximum, also supported by the sensation with the 144 Hz that we already indicated convenient to force at all times with the terminal.

LCD screen: I couldn’t have it all

The Poco X4 GT goes somewhat against the current and still relies on an LCD-type panel for its screen. They are 6.6 inches with FullHD + resolution (1080×2460 pixels) that offer an everyday experience for the range in which it competes.

The quality of the panel, with TrueColor, DCI-P3, and Dolby Vision support, is very satisfying. The conference is protected with Corning Gorilla Glass 5, and the tactile response is perfect, with un 270 Hz sampling.

Sharpness, marked by the density of 407 PPI, is acceptable, as is the typical brightness of 500 nits (maximum 650 nits), of which we only miss the number of AMOLED panels outdoors.
The Poco X4 GT relies on the LCD-type panel to be able to offer a refresh rate of 144 Hz and make a difference from rivals

The contrast of 1400:1 is another of the differences that we can find in the experience with the screen of the Poco X4 GT when we face it with almost twin brothers who point to AMOLED technology. It is especially appreciated in the contents of streaming platforms.

Although, as we have indicated, the native and factory experience of the panel is satisfactory, we can customize it a lot from the system settings, with four image modes and their corresponding more specific modifications.