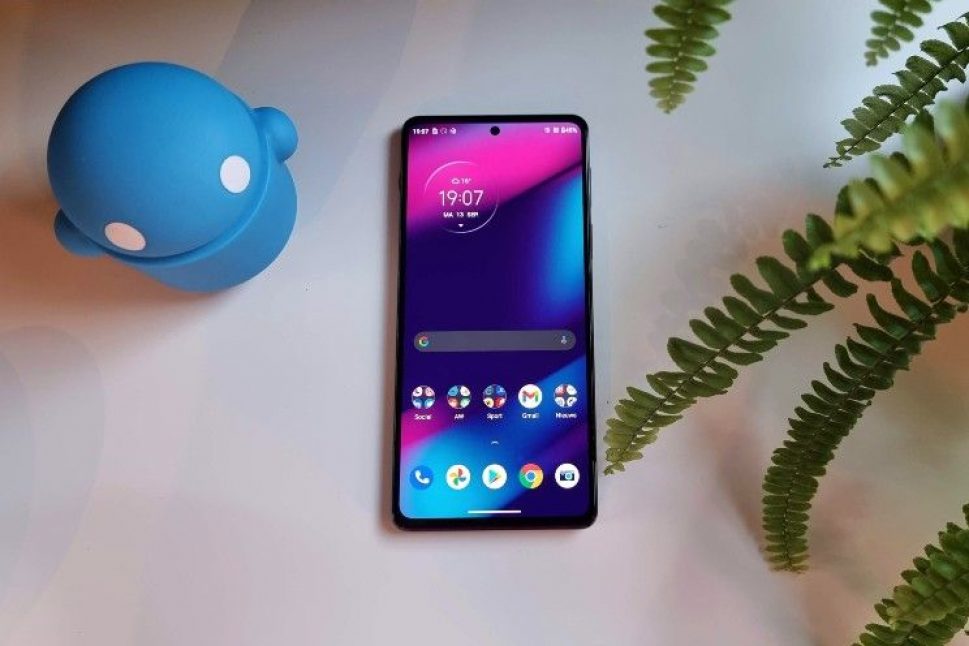 It seems a good balance that Motorola has put a 4,000 mAh battery and fast charging in its Edge 20, a phone reviewed in the following review after testing it for a couple of weeks.

From the moment it is taken out of its box, which includes a transparent cover and the charger, the rear finish of the cell phone immediately draws attention. The white phone – also available in black – reflects different tones depending on the light, resulting in a mobile that looks elegant and modern.

In the upper left corner of its back is the pronounced optical module composed of three lenses: a 108 MP main sensor, an 8 MP telephoto lens (3x), and a 16 MP wide-angle that also functions as a macro camera.

Unlike the Edge 20 Lite, this version does not have the 3.5mm headphone jack. The base contains the USB-C charging port, the audio channel, and the SIM card slot. The volume buttons and the power button are on the right side, which also incorporates the fingerprint sensor to unlock the unit; on the left is the button that allows you to activate the Google Assistant.

The rounded edges make the device feel comfortable – without the feeling that it will slip unexpectedly – despite being a thin and light phone (6.99 mm and 163 g). By the way, the frame has an aluminum alloy.

Motorola says the Edge 20 integrates an ultra-vibrant and ultra-sharp OLED screen, and the reason is not lacking. It is a 6.7-inch (20: 9) Max Vision display with attributes such as 144Hz refresh rate, HDR10 + support, and Full HD + resolution.

The set shines when streaming content or online videos are played. The colors are vivid, and the contrast also shows deep blacks. You also don’t need to turn the brightness to the maximum level to have a good playback experience.

Of course, the panel is interrupted by the circular notch in the center, which houses the 32 MP selfie camera; it is even more evident when playing a long-format movie.

Regarding the audio, it would have been a good idea to implement stereo sound. However, it cannot be said that the only audio channel lacks power, so there will be no problem when wireless headphones are forgotten.

In general, the experience is favorable when playing the episode of a series and even a game live, now that streaming video platforms, such as HBO Max or Star Plus, offer this modality in Latin America.
Performance and autonomy

At the beginning of this review, it was said that there is a good balance between including a 4,000 mAh battery and a 30-watt fast charge. This means that the Moto Edge 20 is ready in less than 60 minutes. In fact, in tests carried out, the power supply went from 10 to 100 percent of its capacity in just 55 minutes.

Heavier users may need to plug in the phone once a day, but that doesn’t mean they should spend around 120 minutes getting their unit at peak level.

Although the Moto Edge 20 Lite integrates a 5,000 mAh battery and a 30-watt charge, it takes about 90 minutes for its battery to be full.

Concerning performance, the Edge 20 incorporates the Snapdragon 778G processor – like the Realme GT Master Edition and Honor 50 – in addition to 6 GB RAM. These features are enough for the smartphone to deliver a good response in all kinds of productivity and entertainment tasks and applications.

The chipmaker says this processor is ready for cutting-edge mobile gaming, accelerated artificial intelligence, and premium capture experiences. In addition, it is compatible with the 5G network.

Regarding storage, Motorola included 128 GB of space, enough to download the apps that each one considers essential and save the content that is generated by the phone, be it photos or video.

With the Edge 20, Motorola provides a “clean” Android experience that is repeated, although that does not mean that it does not deliver one or another touch of the house. Thus, the gestures that allow carrying out different actions on the phone are not left out – from turning on the flash as a flashlight.

To take a screenshot without using any button— or the ability to display different shortcuts just by pressing the power button.

There is also the new Ready For experience, which allows you to use your cell phone as a media player, computer (with the help of a wireless mouse and keyboard), or a video game console (requires a wireless game controller). The novelty is that this platform now offers all these possibilities without using a cable; Of course, this requires that the screen or television accept the Miracast protocol.

In an example of its usefulness, it was possible to use the Star Plus application and play the HBO Max live sports on a larger television through the Edge 20. It should be remembered that the first one is not yet available for all the players in Latin America, while Roku does not run the live broadcasts of the WarnerMedia proposal.

The Ready For modes available includes Ready For PC, also compatible with the new Motorola cell phone. This allows you to duplicate the mobile interface on your computer, with the possibility of copying files from one computer to another. The program to use this option is only enabled for Windows 10, so it was impossible to do the corresponding tests.

Regarding the user experience provided by the main optical system, one of the sections that were improved in the Motorola Edge 20 series, it can be said that it complies so that people have photos with a good level of detail and intense colors.

The camera interface also displays the necessary adjustment options to take pictures of landscapes or small objects on the ground without complications.

In general, the Motorola smartphone is an Android that feels efficient and “clean,” with the possibility, of course, of customizing it to everyone’s taste, from the home screen to navigation inside the equipment.

With 11,000 pesos for the market, the Edge 20 enchants for its large OLED screen, performance, and autonomy. It is a balanced phone both on the outside and on the inside.

Yes, it could have integrated better fast charging, stereo sound, or a 3.5mm jack for wired headphones, an element that is still crucial for some people. However, it cannot be claimed that it does not provide good performance and features that make it different, such as Ready For and the multiple customization alternatives for the user. Will it be enough for Motorola to make a bigger place in the mid-range?