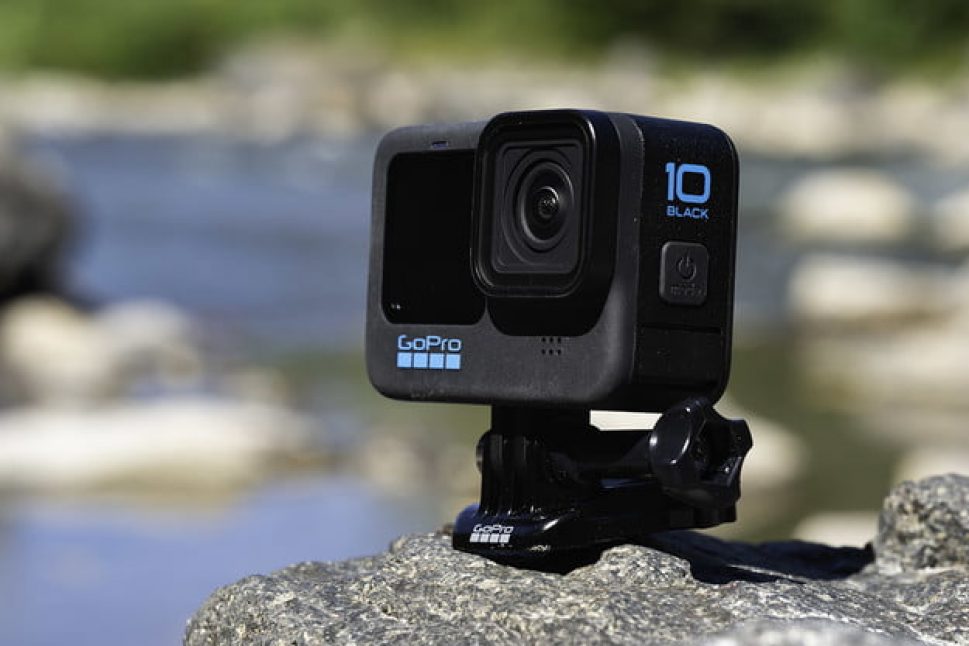 I have been a user of GoPro cameras since the seventh version, so the GoPro Hero 10 Black came to my hands at the precise moment when I had serious doubts about some features of its predecessor, such as night photography or video capture in poor conditions. Light. These two sections improve on the new device, although enough to make it worth it?

Some details that you would like to know more in-depth and that I put to the test during my analysis were:

GoPro Hero 10 Black – Now You Can Do More

Whether it’s to get a glimpse of your dog while playing with him, vlogging for your social media, or extreme activities, the new GoPro Hero 10 Black seems to have a tool for every moment.

This new camera maintains its design with a front screen ideal for vlog recordings and also a display that improves its tactile response, not only with new technology on the panel but also thanks to the internal changes that the company has introduced.

Compared to the Hero 9 Black, the new camera has a processor that finally makes the device easier to handle. The so-called GP2 chip allows the 23.6 MP sensor to have a faster capture response, and the panel also moves faster when you give it instructions.
More stabilization: the great novelty of the Hero 10 Black

In my tests, I put my dog ​​to work. I mounted the GoPro Hero 10 Black on its harness and let it record images without activating stabilization, as well as with medium and high stabilization; for constant and abrupt movements, the latter was of great help. Not using any stabilization is like riding a fairground ride and not closing your eyes: everything moves everywhere.

I also liked the possibility of adapting each shot you take, not only with the resolution of up to 5.3K but also when changing lens types and even the recording format.

When it comes to lenses, there are five types that you can change before you start recording with ease, and they help you tell a story differently. The most common is Super View, which gives us the widest view, but we also have the wide-angle, the narrow one that shows us a little less, the linear and the linear with horizon alignment.

When it comes to photography, the Hero 10 Black can take photos up to 23 MP in four different modes, including a much-needed new night mode, as its predecessor didn’t do a good job in the dark.

One of my favorite modes is Super Photo since the camera decides the best effect and settings according to the lighting.

Of course, this technology does not seem to be fully applied in videos since in night scenes, and I did not get as good a response as I would have liked.

The GoPro Hero 10 is waterproof, and you can submerge it up to 10 meters. However, a more interesting feature is the hydrophobic technology of its lens, which can repel water. If it gets wet and you wipe it off, the water almost magically disappears even with wet hands. You don’t need a towel to dry it because just shaking it repels water so you can continue recording with ease.

Also, I can confirm that this camera is quite strong and that its new material is very strong.

Another novelty of this camera is that it now allows you to broadcast live with 1080p resolution and 132-degree vision. There are other interesting functions, such as the possibility of a program capturing a photo or video or the super-stable time-lapse, which photography lovers are sure to love.

And since we are in the age of subscriptions, GoPro also launched one. In this case, it will help you so that your camera can automatically upload everything you have recorded to the cloud, as well as a high-resolution backup.

In addition to connecting the camera to the computer, you can now link the GoPro to an iPhone or Android phone to download the images, which will surely help you a lot when you want to see the content you are on the go.

All of this is possible through the revamped GoPro Quik app, which offers automatic editing features, exclusive filters, and a simple way to edit all your content in the cloud.

Finally, you should know that GoPro launched a series of adaptable modules to the camera, including a microphone, lights, and even a larger screen if the front is not enough for you.

In my tests, its 1,720 mAh battery, which is identical to its predecessor, gave me the correct duration, although it will depend on the mode you use when recording or taking photos.

The GoPro Hero 10 Black price is $ 499, but if you buy it at gopro.com, with the subscription service for one year, the company gives you a discount of $ 100.