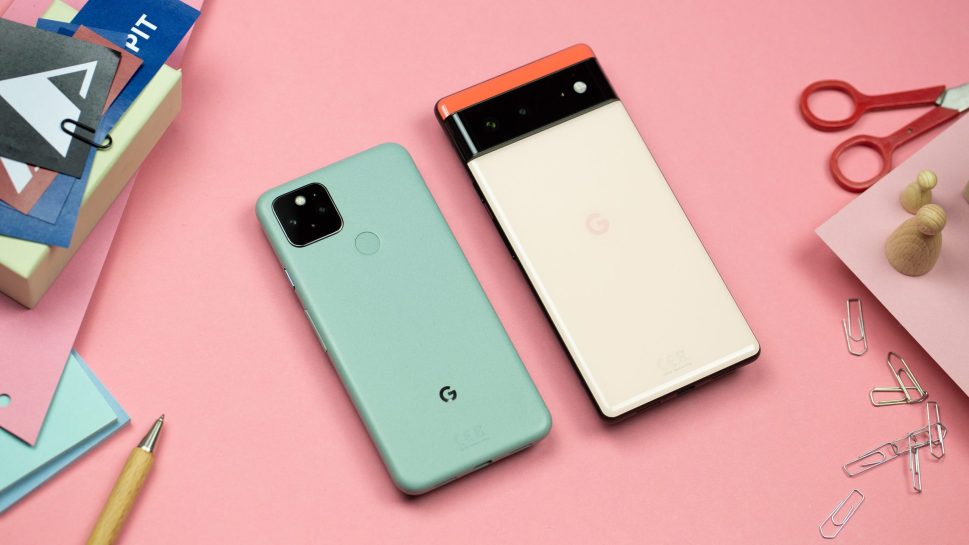 The Google Pixel 6, at least as far as rumors go, will be almost unrecognizable as a sequel to the Google Pixel 5, save for the “G” badge on the back.

Some of these differences will likely be cosmetic, but many more should be notable hardware upgrades mentioned by various independent sources. If these leakers have the facts right, many new techs will come to the Pixel 6 and Pixel 6 Pro, and we couldn’t be more excited.

After upgrading the design from the Pixel 4 to the Pixel 5, Google is making even more significant changes for the Pixel 6. According to unofficial renders, the most noticeable difference would be the addition of a large horizontal bar towards the top of the back. Of the telephone.

This area would house the new camera array, a departure from the Pixel 5’s simple square camera bump. These renders also show a tricolor design, with black, white, and orange areas on the phone’s body.
This body may also be enlarging. The Pixel 5 was a 6-inch phone, which is a bit small for modern Android flagships. The Pixel 6 and 6 Pro are said to measure 6.4 and 6.67 inches, respectively, which are more conventional sizes for 2021 flagships.
Google Pixel 6 vs. Pixel 5: screen and refresh rate

Google used to be the phone maker that ensured everyone just needed a rear camera to compete with hardware-heavy rivals. But the Pixel 5 was the second generation Pixel to use two rear cameras: a 12MP primary sensor and a 16MP ultrawide sensor, plus an 8MP selfie camera.

The base Pixel 6 will reportedly bump the primary camera up to 50MP. In keeping with the Pro title, the Pixel 6 Pro will reportedly have an additional camera on top, likely to be an 8MP telephoto sensor, according to rumors. Currently, there are no rumors about the selfie camera, so we cannot fully assess the words. But given how good Google’s photography is, we’re interested to see where the additional hardware will take the Pixel 6.
Google Pixel 6 vs. Pixel 5: battery and new Pixel Stand

In keeping with its below-average size, the Pixel 5 used a 4,000mAh battery. However, the base Pixel 6 is anticipated to have a 5,000mAh battery, which should help support the more prominent, faster display. The battery size of the Pixel 6 Pro is unknown, but since it’s meant to be slightly larger, we expect it to have more battery capacity.

We don’t know if anything will change about Google’s 18W wired charging system that the Pixel 5 (and previous Pixels) used, but the Pixel Stand wireless charger may be getting updates. A rumor says that the next-gen Pixel Stand features cooling fans, implying that it would use a much faster-charging speed than the current Stand’s 10W.

With so many features being upgraded or completely replaced, based on the current crop of rumors, the Pixel 6 appears to be a considerable improvement over the Pixel 5. We’re particularly intrigued to see what Google does with the so-called Pixel 6 Pro and if the additional hardware to be packed will give Google a phone capable of rivaling or beating the best Android phones from Samsung and OnePlus.

Google Pixel 6 vs. Pixel 5: specifications and a new chip from Google

Google broke precedent last year when it offered the Pixel 5 with a non-flagship chip, the Snapdragon 765G. It looks like it might be about to do it again with the rumored Whitechapel chip, designed by Google.
This chip could, just as Apple manages with the A-series chip and iOS, allow Google to more closely integrate Android into the Pixel 6, making it a performance boost. Or more powerful and more responsive. The Pixel 5 already offers one of the best Android experiences, so we’re excited to see what the Pixel 6 could do.

It seems like a given that the Whitechapel chip will also support 5G. The Pixel 5 was the first 5G flagship Pixel, with mmWave and sub6GHz support, so it will likely be the same as the Pixel 6 series.