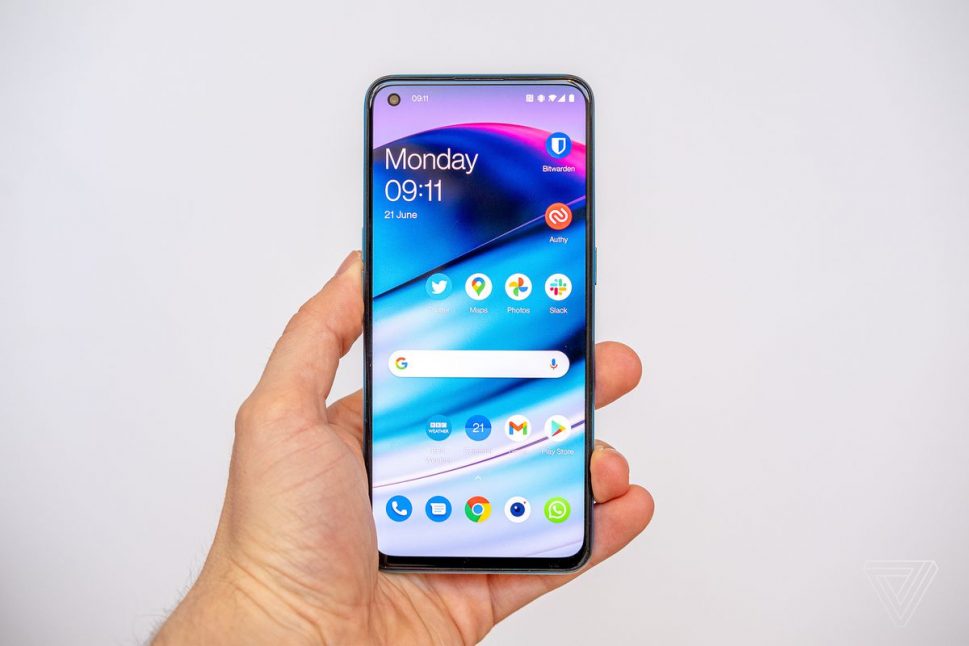 OnePlus returns to the charge in the territory of mid-range mobiles, and, in this first half of the year, it comes to do so with a new member of the Nord family. The OnePlus Nord CE 5G is a little brother of the original OnePlus Nord; it is based on the said model but cuts to lower the price. Its name comes from ‘Core Edition,’ since the idea of ​​OnePlus is to keep the most essential of the Nord: its user experience, design and competitive hardware,keep reading the review.

This new OnePlus Nord CE 5G passes through our analysis table, a terminal that comes to fight in the range of 300 euros and that, as we anticipated, is one of the most competitive options in the mid-range.
A less premium design, although it doesn’t matter too much.

OnePlus Nord CE 5G on the left, OnePlus Nord on the right. They look like two drops of water, but there are differences.

The OnePlus Nord CE 5G gives up the rear glass that the OnePlus Nord had. However, this play has gone better than you might think. The new model has a matte plastic that does not get dirty, with an even more striking blue colour and slightly darker sides that change colour as the light hits. The camera module sticks out a bit, although the mobile does not dance excessively when facing up. The OnePlus Nord CE 5G is less premium but more comfortable and visual.

The OnePlus Nord CE 5G has a matte finish and does not get covered in fingerprints.

The thickness has been lowered at the level of dimensions, despite having this model with a headphone jack and a larger battery. The height and width are practically identical to the original Nord: it is below 16 centimetres, so it is not a small mobile, but not one of the largest and most uncomfortable.

The front is well used.

If we turn it around, we find identical frames to the previous model, which is good news. When looking at its sides, we see that we have lost a button; the classic Alert Slider disappears. If we have never had an iPhone or OnePlus, this will not be a major problem, but it is a relevant loss since this was one of the most differential functions of the OnePlus: controlling the volume modes with a button.

Regarding the screen, it is practically identical to that of the original OnePlus Nord. We have a 6.43-inch panel with Full HD + resolution and a refresh rate of 90Hz. Its weak point is the viewing angles, as the panel turns somewhat purple when tilted. The strong point is the calibration and the brightness since it is a panel enjoyed even when we are in full sun.
In mobile of this price range, 120Hz is appreciated, but with 90Hz, we are leftover. The OnePlus manages to activate them almost always.

The 90Hz gives that extra feeling of fluidity, and no more refresh rate is needed on mobile in this price range. By losing a front camera, the screen now only has a hole, so the experience when viewing multimedia is somewhat better since we do not have such an intrusive element.

The general quality of the panel, one more year, is at the height of what is expected in a OnePlus terminal. It is a screen worthy of slightly more expensive mobiles, also having the advantage of moving away from the 6.67 inches that make the terminals so large.

There is a headphone jack, but we miss a stereo sound.

To finish with the multimedia sections, note that the audio is good quality and that we have a headphone jack, great news. However, in a 300-euro terminal, we have already begun to ask for double stereo speakers since the experience with a single speaker is quite flat and inappropriate when we want to play, listen to music or watch a movie.
A small step back in the processor and a big jump in battery

OnePlus has bet this generation on the Qualcomm Snapdragon 750G, compared to the Snapdragon 765G of the previous generation. The 750G, however, has a new Cortex-A77 architecture, so, despite being less powerful on paper, it is more efficient. At the level of performance and user experience, the OnePlus Nord CE 5G flies, and the experience with day-to-day apps and multitasking (especially in our version with 12 GB of RAM) borders on the high range.

Playing ‘Genshin Impact’ for a long time with the graphics in the middle (in high settings, it suffers), we noticed a small thermal increase and how the processor began to suffer. However, the user experience is magnificent, and except for long gaming days, we will not lack power. We leave you with the performance tests of this new Nord.
OxygenOS optimization helps this processor a lot. Tiny animations, little bloatware and a clean interface, we want more layers of customization as well. OxygenOS is still a marvel, although it moves away from “Pure” Android little by little. Everything works very electrically, we have a few pre-installed apps (notes, a game optimizer, some OnePlus app and little else), and the customization options are high. It Always has On Display, themes and all kinds of customizations.

In addition, it is updated to Android 11 and in the two weeks that we have been testing it, I have received two OTA updates to improve the camera, errors and system stability. Being a mid-range, it should update for at least two years, so this new Nord CE 5G will probably stay on Android 13 (if it is called that).

At the battery level, the experience has improved considerably compared to the previous generation. Now we have a 4,500mAh battery, with which we can easily reach 8 hours of the screen in an intensive day. Despite having a 30W charger again, the charging has been optimized so that the times are similar to those of the previous generation. The OnePlus Nord CE 5G charges in just an hour and takes 25 minutes to get to 50% from 0%.

A decent camera with just the right sensors

The camera has been the big step back in this new generation Nord. Although we now have a 64-megapixel sensor on paper, this sensor has smaller pixels, the lens now has a little less aperture, and we lose the OIS. The loss of the optical stabilizer is the most important, as this helps to shoot faster, avoid shaky photos, and allow the image signal processor to obtain sharper photos.

Before talking about the photography experience, let’s talk about the camera application. Luckily there have been hardly any changes here, so we have a relatively fast and quite functional camera app.