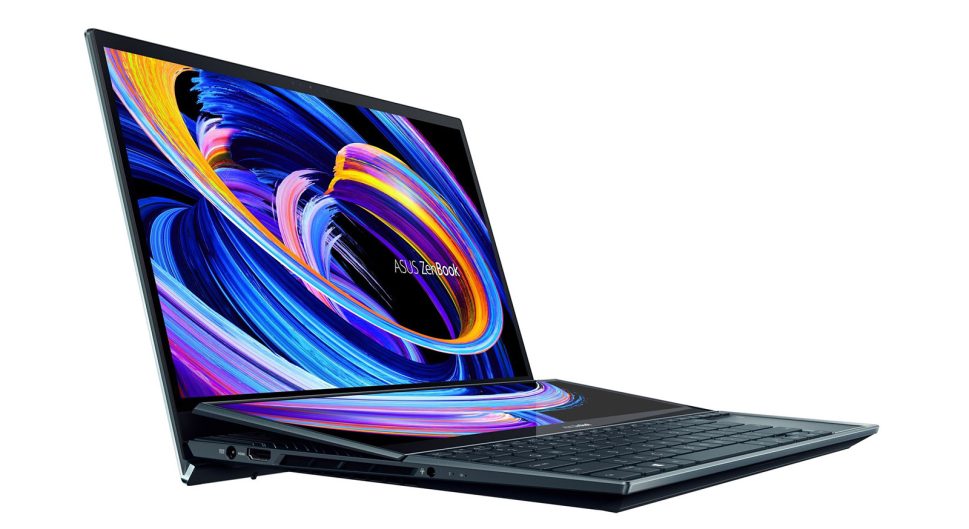 However, there is another segment that is perhaps not talked about much, and that is luxury laptops. To this belongs the new generation of the ZenBook Pro Duo 15, a team that has top-of-the-line specifications but also has a second screen.

Someone likely wondered how there could be a second screen on a laptop without removing, precisely, the adjective portable. However, it is possible: this second panel goes just above the keyboard. It is an extension of the main screen, which makes using such a computer much more comfortable and accessible in specific contexts.

The ZenBook Pro Duo 15 has eye-catching details on the aesthetic theme. The first thing is that at the bottom, it has a kind of support, similar to some tablet cases, which is used to raise it a little and give it an angle that may be more comfortable. This fulfills two functions because, in addition to submitting it, it also allows ventilation to flow better, even though it is not a device that gets too hot, especially in the keyboard part.

The other detail is that the ScreenPad, the secondary panel, rises automatically when opening the notebook, which makes sense, especially when using the stylus since the position is more natural. Overall, it’s clear that Asus invested time and brainpower in designing the rig to look flashy with its screens and be right in its usability. A laptop with two screens will not make sense if the user experience is poor, which is not the case with the ZenBook Pro Duo 15.
negative aspects

Despite the above, a few less positive points need to be mentioned. The main one is the battery because, during the tests, only two hours of duration were timed when using the equipment to surf the internet. On average, there were ten tabs open in Firefox, the second screen on all the time, both brightness at half, and no extra peripherals connected, not even headphones. This is not enough if you think the duration will be reduced even more with more demanding software, such as editing programs or video games.

The other detail to question is in the ports. This equipment has one for USB-A and two Thunderbolt 3, which are insufficient since a peripheral will have to be sacrificed on more than one occasion due to lack of ports. Perhaps at least one extra USB-A would not hurt; it could even be said that it is indispensable for a team that has elements that seem unnecessary.

This ZenBook Pro Duo is, as mentioned, top of the line. The processor is a tenth-generation Intel Core i9 at 3 GHz speed, plus 32 GB of DDR4 RAM, 1 TB of VM SSD storage, and it has an NVIDIA 3070 graphics card. Due to its internal parts, the equipment is ultra-high-end, except for the video card, which is not NVIDIA’s most advanced but close.

The screens deserve a separate mention. The main one is a 4K resolution OLED touch panel. The fact that it is a touch laptop makes it very comfortable since you can use your fingers to scroll on the screen or touch buttons or elements when working with any software. And it is also 4K, which at 15.6 inches in size may seem unnecessary, but it is a luxury notebook.

In addition, what Asus calls the ScreenPad, the second screen: is a 14-inch diagonal IPS panel with a high resolution of 3,840 x 1,100 pixels, which is complemented by a stylus. Due to its features, the second panel isn’t as bright or thin as the main OLED, but it’s fine enough for mostly supplemental use.

The ZenBook Pro Duo is focused on dedicated users creating content, whether they’re designers who work with images, photos, and graphics or video or audio editors who typically use two screens on a desktop.

With so much power, it is a portable option for more professional users. And although it does not have the gamer profile like other models that Asus also manufactures under the ROG line, it does serve a lot for video games. Because with such a processor, RAM, and NVIDIA 3070, this Zenbook is more than enough for any current game and those that will come in the following years. This is because the NVIDIA 30 series, even in laptops, includes technology becoming more and more standard, such as support for ray tracing and DLSS, which is a great differentiator compared to AMD video cards.

The ZenBook Pro Duo 15 is an outstanding and powerful laptop. Although it is a premium experience aimed at a specific profile, in reality, due to its technical capabilities, it serves any purpose. The main screen is one of the best for laptops, and the ScreenPad sub-panel is very useful, aside from not replacing a larger 16:9 monitor, but it never feels like a gimmick.