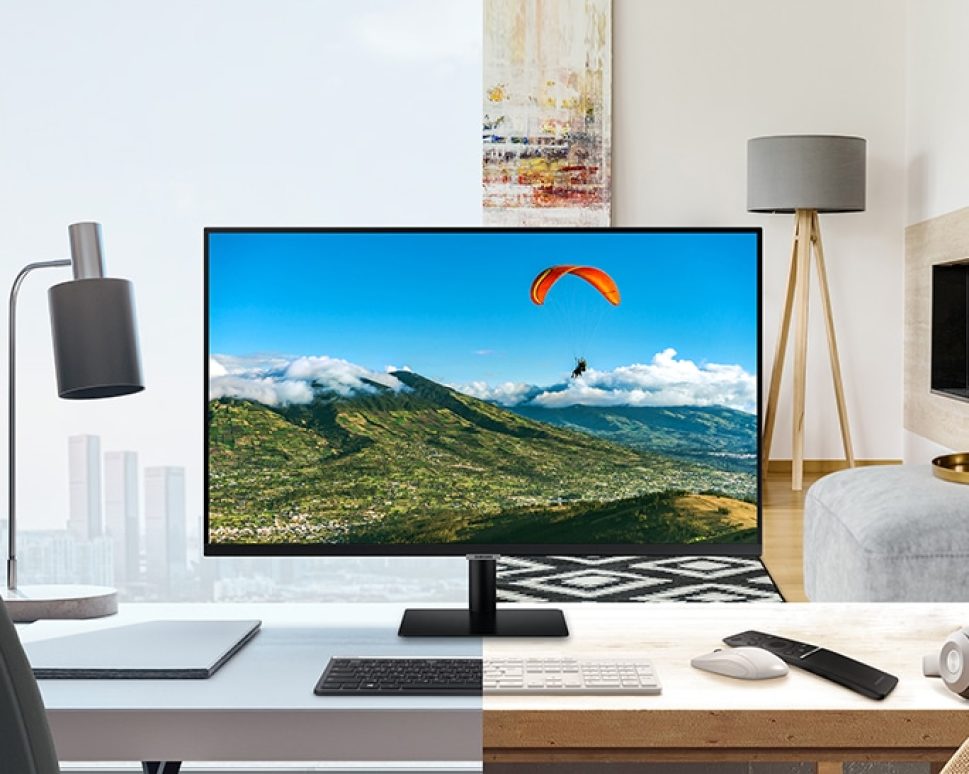 At first glance, Samsung’s LCD monitor doesn’t look that different from other offerings: 27-inch size and Full HD resolution (1,920 x 1,080 pixels). In addition, its design does not allow the panel’s height to be adjusted, so it may require that it be placed on some base so that it is in a good position for people to see.

Of course, in its rear part, it incorporates a pair of HDMI (2.0) —one of them is ARC— and two USB ports so that it can be connected from the laptop to a flash memory with photos and videos.

It is also not a minor thing that a remote control comes in the purchase package. It is an element that should be included in more latest generation monitors because it facilitates its operation.

Finally, related to its design, the integration of an audio system stands out —more potent than other displays of its kind—which can be good news for those who want a “cleaner” desktop without so many peripherals.

It is almost a fact that the monitor will be used as a second screen for our laptop. Still, it is also efficient to directly access different entertainment platforms, such as HBO Max, YouTube, Netflix, Star Plus, or Spotify.

We had the opportunity to integrate via HDMI a MacBook Air with the M1 chip and a Huawei MateBook 13s for this review, and it is very convenient to display about two windows on the Smart Monitor M5 simultaneously; They could be adjusted more (especially now that Windows 11 makes the process more accessible), although that will depend on the productivity needs of each one.
Samsung M5

It is possible to go to the settings of the Samsung screen – employing the remote control – to select the best image mode and the video source that you want to use at a particular moment. At first, the overall interface seems a bit complicated, but it’s all a matter of practice to make it seem more intuitive.

The display also has the option to communicate with a laptop wirelessly, which we were able to do with the MateBook 13s. Even though it supports AirPlay 2, the wireless link between the screen and the Apple laptop was impossible. Another consideration is that there is some action delay in wireless mode, and the displayed graphics do not reach Full HD resolution.

For whom is it?

The Smart Monitor M5 will satisfy those looking for their first extra screen to integrate it into their desk or work table, as they will find a display that offers other alternatives for fun and entertainment.

Indeed, it would not have been a bad idea for the monitor to integrate a resolution higher than Full HD or for its design to allow the panel’s height to be adjusted. Still, perhaps this would have meant increasing its price, which for Mexico is just over 6,000 pesos. (around 300 dollars for higher reference).

Its remote control is another of its hallmarks since the latest generation and more expensive devices do not even contemplate it.

For entertainment, a laptop is not necessary to access streaming video platforms. The monitor, by connecting to the Internet and including the Tizen operating system, lets you download video, sports, and game applications, among others.

What is surprising here is that, for example, when running some subscription service, such as Netflix, HBO Max, or Apple TV Plus, you have more picture modes (dynamic, standard, natural, and movie) than when using the monitor as a second screen (vibrant and traditional).
Samsung M5

Also, the equipment lets you run Samsung TV Plus (enabled for Mexico and Brazil in Latin America), a gateway to multiple channels, both local and international.

In this sense, the Smart Monitor M5 is closer to an intelligent screen for entertainment, as it does not rely on a computer or media player to deliver people’s favorite video platforms.

By the way, viewing photos stored on flash memory – through one of the USB ports – is also pleasant. The viewer is intuitive and the colors displayed are clear and accurate.

Samsung’s Smart Monitor M5 not only presents itself as an attractive screen for those looking to work at home more efficiently but also acts as a smart TV. We tested it for a few weeks, so in the following analysis, we delve fully into its attributes and the opportunity points that are presented to it.