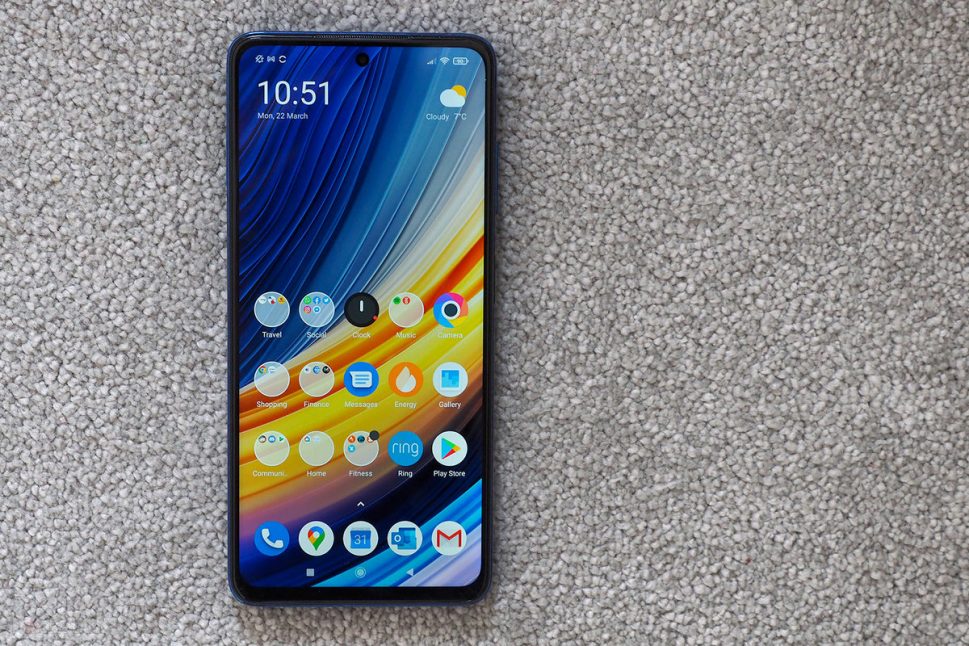 Recently Poco surprised us with a mid-range terminal piece at an unbeatable price. Today it does so with the update of this POCO M3, adding the long-awaited 5G and some small details that make it even more complete.

A few months ago, they surprised us with the POCO M3, and now thanks to Goboo, we have here the new Poco M3 Pro 5G.

For those who do not know (which will be increasingly common to hear about this brand), it is a sub-brand of the famous Xiaomi company characterized by very cheap terminals. And in this case, around € 150 in its most affordable version.

Its normal version comes in a yellow box with black letters both on the top and on the sides. You can see the 5G logo in various areas of the box. It also includes the CE (European Conformity) symbol that indicates that it meets the legal and technical minimums in terms of safety to market it in Europe.

This Poco X3 Pro 5G comes under the MIUI 12.0.5 customization layer based on Android 11. This is the adaptation that Xiaomi makes with the Android system, but unlike a normal Xiaomi, this device uses Poco’s Launcher in its version 2.0. In other words, it uses a custom theme to give the graphical interface another design. It is a very complete and functional operating system. Also, from my point of view, it improves the application drawer by dividing it into different themes.

It is a global ROM that can be updated via OTA (automatic updates by notification) that includes several languages, including Catalan, Galician, and Basque.

As it is a global version, it comes with Google services. It includes the Google Play application store, YouTube, Chrome, Drive, Photos, Maps, Gmail, and native Android applications such as the File Manager, calculator, calendar, and the FM Radio application.

As is customary with Xiaomi, it also brings many promotional applications such as Facebook, LinkedIn, Aliexpress, Netflix … and many installed games, although they can be uninstalled without any problem. This will depend on the region we are in.

In the main menu, we find the same options as in other Xiaomi devices. It includes the option to clone applications to use the same application with two different accounts, the programmed on and off, the color calibration of the screen, and even includes a “game turbo” mode for games.

As for security, this terminal has a fingerprint reader on the side that can be configured with up to 5 fingerprints. This unlocking is accurate, although there is a slight delay until the screen is unlocked. It also has image-based facial recognition. It works well, and as you can see in the following video, it cannot unlock us if we wear sunglasses or a mask. I take this opportunity to remind you that this system is very unsafe. Mention that it also works well and allows you to save multiple faces.

The security level of this terminal is Widevine L1 to play Netflix, HBO, or PrimeVideo videos at the highest quality (Full HD or higher).

After passing the Malwarebytes antivirus, it has not detected malicious applications.

And although the promotional images do not show the edges, in this case, this device has edges of 2mm on the sides and 5mm on the bottom of the screen. In addition, it has a drop-style notch in the center of the screen. This camera is medium in size (not too big and not too small). The usable screen area reaches 83%.

It is a simple screen, which improves on its predecessor. It has a maximum brightness of 400 cd / m², and the contrast ratio is 1500: 1. In times of many suns, you will have to strain your eyes to read the notifications well. The colors are not as vivid as you might expect (84% NTSC). Also, the maximum refresh rate is 90Hz.

To taste the colors, and this time the design of the back divided into opinions. It has a 3-camera module on the left side, and a double led flash on the side. This camera module is integrated into a black detail that protrudes 1mm from the phone’s chassis.

Just below this camera module appears the mark “POCO,” A little further down, you can see “CE,” indicating that it complies with European regulations. The entire back has a “gray” color with gradients depending on the light.

Mention that there are 3 colors: Gray, yellow and blue.

The back has a slight curve at the edges to make it more comfortable to grip.

The sides follow the same aesthetic as other phones. The right side has the volume up and down button, and just below it is the “Power” button (on and off). On the left side is the slot for 2 nano-SIM cards or a micro-SD card and a nano-SIM.

At the bottom, you have the USB type C (reversible), the speaker, and the microphone. On the contrary, there is another speaker at the top, an infrared led (to use it as a remote control), and the 3.5mm Jack headphone connector.

The Poco M3 Pro 5G is the latest phone presented by the Xiaomi sub-brand. And despite being a very inexpensive terminal, we wanted to submit it to the AnTuTu Benchmark version 9.0.7 performance test to compare it with other terminals and check its gross power. After subjecting it to the test, it has obtained 332,371 points, with which we corroborate that despite improving with its normal version (Poco M3), it is a simple device within the mid-range.

And to add the 5G network, they have chosen to use the 8-core MediaTek Dimensity 700 (MT6833) processor with a maximum speed of 2.2GHz. It is a chip with a 64-bit architecture manufactured in 7nm, and an Arm Mali-G57 MC2 graphics card accompanies that.

This is one of the changes with the normal Poco M3.

In this case, I have the 6GB version of LPDDR4X RAM and 128GB of UFS 2.2 storage memory, but there is a slightly more affordable version: 4GB of RAM and 64GB of storage. Concerning the version of the Poco M3, the type of storage memory improves slightly.

After subjecting it to a speed test, it has obtained a maximum reading speed of 965MB / s and 489Mb of writing on the storage memory. The RAM test has given a figure of 187MB / s of reading and 166MB / s of writing.

As we have already mentioned, it has an expansion slot to increase the internal memory.
It is a simple phone with quality hardware with which we should not have problems for normal use of applications. Both for messaging applications