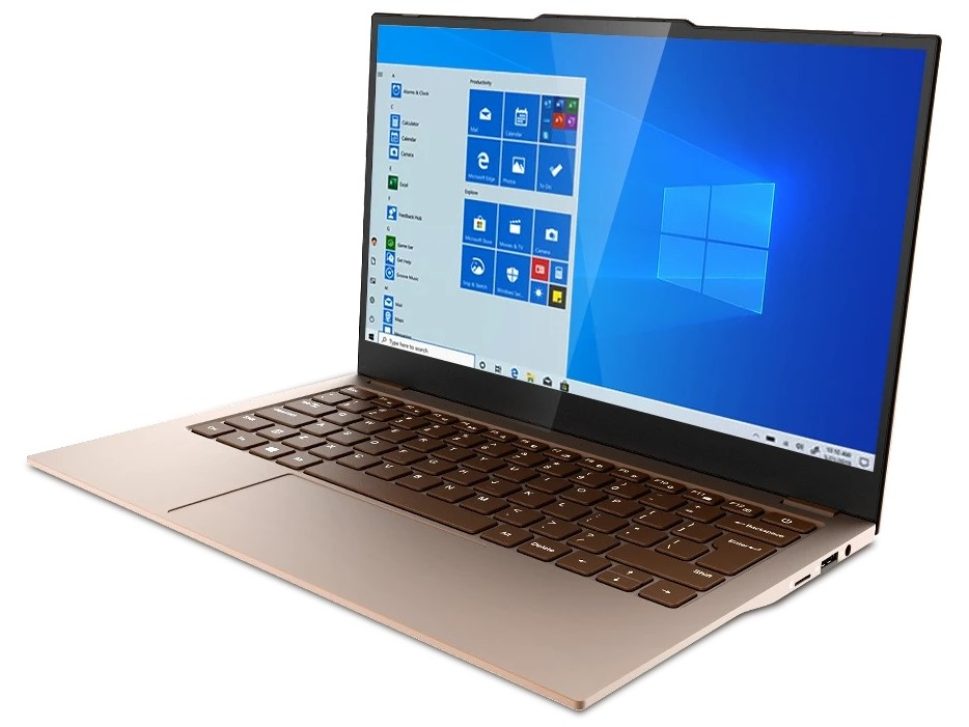 This time GearBest sent us a laptop to analyze it and write our impressions. This is the new Jumper EZbook X3 Air, an ultrabook with a pretty good design and features that will surely interest many.

The computer comes in a white cardboard box with the brand’s logo in the center. On the sides is the name of the brand “Jumper tech” and a small sticker that indicates the device’s characteristics. This product adds the CE symbol of “European Conformity,” suggesting that it is suitable and complies with the rules for sale in the European Union.

We find the device at the top wrapped in a fabric cover when opening it. On the side, there is a box that includes the European charger of 12V at 3A and 36W of output. Underneath the computer consists an instruction manual in various languages, including Spanish.

This new Jumper is made of aluminum, following the style of the ultrabooks (more specifically, that of the MacBook air). But what most strikes me about this new laptop is its light brown color.

This computer’s frames are skinny and around 7 mm to the screen. The camera is located right in the center and is very well integrated.

The back is entirely metallic in brown, and right in the center, it has the brand’s logo. This logo does not light up.

The bottom has two speakers on each side and a small cover to add an SSD hard drive of up to 128GB (according to the instructions). To access this slot, you need a Phillips screwdriver (it is effortless to access the place).

The keyboard has a QUERTY layout without Ñ without lighting, although it can be configured from the Windows settings to use the Spanish layout.

This Jumper EZbook X3 Air Computer comes with Windows 10 Home 64bit so that it will receive official updates from Microsoft. It has a license that is activated when the computer is configured.

The operating system comes with all official Microsoft languages ​​(multilanguage), including Spanish, English, Chinese and Russian. In addition, it comes with clean software without applications or third-party programs; if necessary, we can download it from the Microsoft Store.

I also wanted to check the status of the Operating System by running an antivirus. After giving it Malwarebytes, it has detected two malicious applications. Doing some research, I discovered that it is “LuDaShi,” a Trojan that displays annoying advertisements in the browser. That is why I would recommend removing them from the antivirus itself.

This computer uses a 4-core Intel® Celeron N4100 processor with a maximum operating frequency of 2.40GHz. It is a 64-bit architecture manufactured at 14nm and prepared for low power consumption.

In this case, this computer does not have its own graphics card and uses processors. It is an Intel HD Graphics 600 GPU with a maximum frequency of 700MHz.

The RAM is 8GB of type LPDDR4 and cannot be expanded.

As for storage, it has 128GB of internal memory. However, considering what the operating system occupies or the installed applications, we are left with approximately 92.1GB for our use. It includes the possibility of expanding the memory by adding a micro-SD card or adding a 128GB M2 SSD hard drive. In this way, we would have two partitions of 128GB each.

This computer does not allow adding a 4G or 5G card, nor does it have an RJ45 port to add a network cable, so we can only connect to the Internet through WiFi.

For this, it has the IEEE 802.11a/b/g/n/ac protocols of 2.4GHz and the IEEE 802.11ac protocol of 5.0GHz that improves connectivity and avoids interference between other equipment connected to the network. It also has Bluetooth 4.2.

However, it might be advisable to buy an adapter to micro USB or USB tip or C to Ethernet so that it can be connected to a network cable.

And finally, the section that can tip the balance for or against: the battery.

This Jumper EZbook X3 Air has a 4250 mAh battery of 7.6V and 32.3 Wh, with which we can spend approximately 4 or 5 hours continuously. However, it depends on how you use it and how the power mode is set.

In my case, I have used it to perform office tasks, browse the Internet and watch a movie through Amazon Prime or Netflix, and in most cases, I have reached 20% after three and a half hours. Later, activating the energy-saving mode, I managed to last up to 4 hours and a quarter.

When it comes to charging, it has done so quickly and steadily, these being the times in sleep mode: